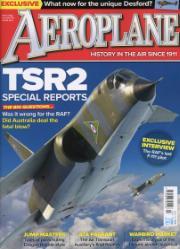 Launched as a monthly magazine in May 1973, Aeroplane combines in-depth coverage of aviation history with news and features on today s thriving aircraft preservation scene in Britain and around the world. With an unrivalled reputation for accuracy, authority, readability and style, Aeroplane is one of the UK s top-selling aviation magazines. Today s Aeroplane traces its lineage back to the weekly news journal The Aeroplane , founded by the legendary and opinionated C.G. Grey 90 years ago in June 1911, and published until 1968.