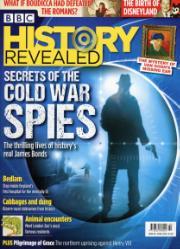 BBC History Revealed focuses on great stories from history, retelling great and famous episodes from the past in an accessible, visually compelling, and engaging way. It reaches out to history enthusiasts, as well to a family audiences seeking ways to inspire their children to take an interest in the past. It also appeals to those whose most direct interaction with history is through historical fiction in print, film and television, so it has clear links to cultural historical content, such as Victoria and The Last Kingdom.