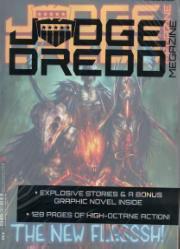 Though this is more than just a comic book it does feature some fantastic stories from the world of Judge Dredd, featuring the Judge himself as well as lesser known characters. The artwork is as excellent as you would expect throughout, and will keep any fans enthralled. The Megazine also features interviews and news from the world of comics and reviews of recently released sci-fi films.