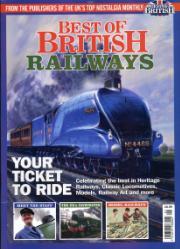 Best of British Railways is a selection of railway related features from the pages of Best of British, the UK¿s favourite nostalgia magazine, now celebrating its 25th anniversary. From Mallard¿s record-breaking run to a journey on the luxurious Belmond Northern Belle, join us as we celebrate almost a century of British railway history. Learn how the project to build Tornado got off the ground, meet those who keep our railways running, relive the joy of receiving a train set for Christmas and visit heritage railways and museums such as the Keighley & Worth Valley Railway ¿ the location for the 1970 film The Railway Children. Whether you have a life-long interest in the railways or just a passing fancy, let Best of British Railways be your ticket to ride.