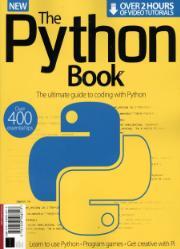 Python is perhaps the most important programming language of the moment. This is largely due to one device: the Raspberry Pi, of which 5 million have now been sold and for which Python is the official recommended code. However, it's not just there that Python is making waves, as huge companies like Google, Yahoo and Lucasfilm use the code internally. The Python Book is the ultimate guide to mastering this essential code, featuring a Python masterclass, plenty of hands-on tutorials and tips for Python enthusiasts of all levels.