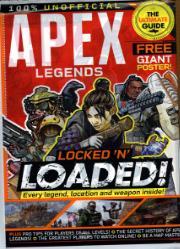 Apex Legends is a free-to-play battle royale game published by EA, launched Feb 2019. The game is available on Microsoft Windows, Playstation4 and Xbox One. Similar to Fortnite, the game pits teams against each other and the last man standing wins. The game had two million players on launch day, and 25 million players by the end of the first week. On Twitch, the video game streaming site, Apex Legends accounts for the most watched, fastest growing and most followed accounts. This unofficial magazine comes polybagged with an A1 poster, Content includes: character profiles, weapons guides & tips to improve your game play.