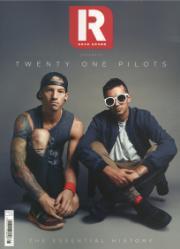 The Essential History provides an unrivalled look back on the events of the last several years, of which Rock Sound received unparalleled access, anywhere in the world.   Featuring full colour photographs of live shows from the last several years - many of which have never been seen before - it also includes full reprints of three separate Rock Sound cover features, beginning ahead of the release of 'Blurryface' in early 2015 and leading up to the band's Alexandra Palace double-header in November 2016, which came on the back of the global smash hit single 'Heathens¿. Released ahead of the band's upcoming Bandito Tour, The Essential History provides a detailed and intimate portrait of one of the most sought after bands around, providing exclusive access that was granted to no other publication.