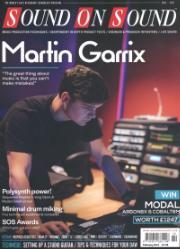 Launched in 1985, Sound on Sound is recognised internationally as the bible of the hi-tech music recording industry. Every month we deliver over 300 pages packed full of in-depth reviews of Synthesizers, Samplers, Recorders, Music Software, Mixing Consoles, Effects and Signal Processors and not forgetting studio essentials like Microphones and Monitors, plus the best musician, engineer and producer interviews you ll read anywhere. Our regular tutorials and practical how to workshops offer no-nonsense advice for beginners and professionals alike. With a highly experienced editorial team second to none, Sound on Sound has consistently remained at the forefront of music technology since it was launched by the visionary SOS Publications group way back in 1985, championing the convergence of MIDI, Computer technology and Recording equipment that continues to revolutionise the music production industry today.