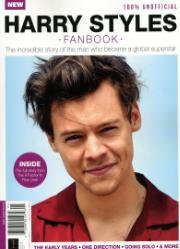 The Ultimate Harry Styles Fanbook is written in an enthusiastic tone and fan-focused style, richly illustrated with photographs of the heartthrob and charts the evolution of Styles's career - from his discovery on the X Factor to his rise to a global superstar and conquering the world as a solo artist and actor in 2017's Dunkirk. It comes in anticipation of his long awaited and hotly tipped 2nd solo album.