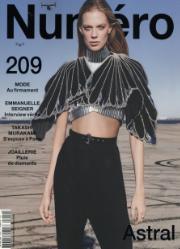 Numéro is an international fashion magazine. Numéro was founded in 1998 by Elisabeth Djian, who is now the magazine s editor-in-chief.When asked why she created Numero, Djian commented, I was bored with magazines that told me how to seduce a man. I wanted to create this magazine for an intelligent, smart woman who wants to read about art, design, music: not about stupidity ¿ creams that take away wrinkles, you know, which is stupid.