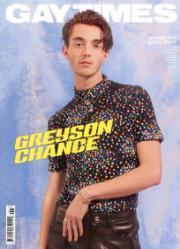 Founded in 1984, Gay Times magazine is probably the original gay magazine in the world. We grew from a marriage of Him magazine and Gay News - which was the victim of the last successful blasphemy trial in the UK, in 1977. We have grown enormously from our political and campaigning roots, keeping these integral, but growing into an exciting gay men s lifestyle and current affairs magazine featuring style, interviews, comment, music and arts, health and grooming. We are the world s definitive gay magazine. Last year we had a bold redesign and re-brand and are moving through our third decade with a renewed sense of excitement.