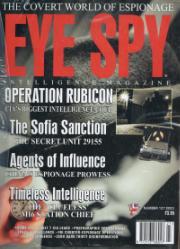 EYE SPY! magazine, a new and highly controversial magazine that lifts the lid on the shadowy world of intelligence, espionage, terrorism, black projects, military matters, and much more besides. EYE SPY! is a magazine that encompasses a little more than the romance of James Bond and Co. Espionage and intelligence gathering is the world¿s second oldest profession and affects every single country in the world.EYE SPY! features all the great spy bases in the world on a regular basis, including many facilities that are not publicly known.Everyone loves a thriller and a mystery, and EYE SPY! is dedicated to pursuing true stories from the UK and further afield. EYE SPY! publishes intelligence, espionage and military-related features every issue and case files on government corruption, which is widespread.