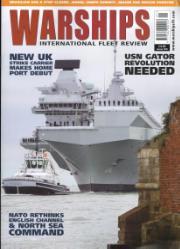 Warships IFR, Britain s leading bi-monthly naval magazine. Each 56 page issue is packed with quality photographs, both in colour and black and white, many exclusive to the publication. WIFR aims to put the spotlight on the latest developments in the world s navies. WIFR is edited by a former defence reporter for one of the national newspapers together with a top team of reporters and published by an established company. WIFR reaches a market so far neglected - WIFR is a specialist naval and defence magazine now available on subscription and from leading outlets and is read by active and retired naval personnel, MOD officials and other service headquarters staff, embassies, defence attaches, MP s, Royal Marine Units and by the very serious enthusiast.