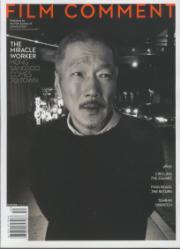 A forum for smart, idiosyncratic writing about movies, Film Comment, published bimonthly by the Film Society of Lincoln Center, has earned and sustained a reputation as the finest film magazine in the English language. Every issue is notable for the unusually literate, often elegant, style of its authors. Handsomely designed, Film Comment brims with provocative, cutting-edge articles about all aspects of the art, entertainment and industry of filmmaking. Bi-monthly.