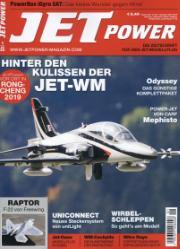 Jet Power magazine has been published in German since it was first launched. The editorial team have had interest from all over the world, from Hong Kong to the USA. This was inspite of the fact that most readers were unable to understand the German text. Due to this kind of demand the team are now producing Jet Power in English. The full color magazine will be published quarterly, it has 68 pages full of information on the international jet-scene as well as advertising by the most of the main producers all over the world.