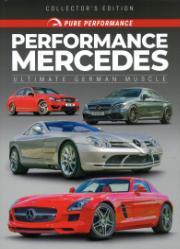 Pure Performance is a quarterly series aimed at celebrating the very best performance car heroes from the past 40 years. Reflecting a golden age of motoring, when style and performance became just as important as form and functionality, Pure Performance will celebrate legendary cars such as the Porsche 911, VW Golf, Mazda MX5 and many other automotive performance icons from Germany, Japan, UK and elsewhere around the world.