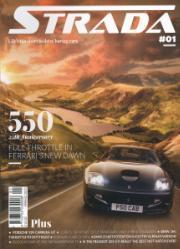 Strada Magazine is a new magazine dedicated to the heroic cars of the 1980s, 1990s and 2000s. Strada Magazine is a fresh, new quarterly take on an era of cars that has come to dominate the classic car landscape. Call them Youngtimers, call them modern classics, the cars produced between 1980 and 2010 contain among them true icons that transcend generations. From the Ferrari 550 Maranello to the Peugeot 205 GTI, this era of cars drives a passion that burns bright even for those whose driving test was a mere pipe dream formed on the living room carpet with toys or via computer games when these cars were new. Now these cars are highly sought after; and Strada Magazine is here to reflect that passion.