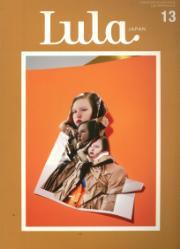 LULA Japan is managed by editor Kazuo Sazuki who has launched several highly acclaimed culture and fashion magazines in Japan. LULA Japan is the Japanese declination from the famous UK magazine LULA. It is a biannual magazine offering a divine mix of the finest fashion and photography talent. With its poetic editorials and assemblage of international contributors; LULA Japan surprises and enlightens. LULA inspires women to seize their own creativity and take on the world. Presenting both underground and high fashions in its trademark dreamy quality, it¿s a photo book filled with the type of women you want to be best friends with.