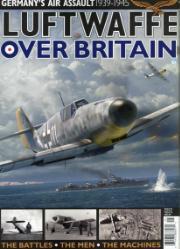 The Battle of Britain is described as the first major military campaign fought entirely by air forces. It took place during the Second World War, when the Royal Air Force defended the United Kingdom against large-scale attacks from Nazi Germany's air force and the Luftwaffe. 2020 marks the 80th anniversary of the Battle of Britain which took place between July and October 1940.This highly anticipated commemorative publication will tell the story of The Battle of Britain alongside stunning archive imagery.