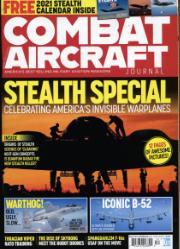 Unrivalled in its in-depth coverage of the world of military aviation, Combat Aircraft includes reports, expert briefings and special features on current military aircraft and industry matters. Illustrated with the finest images provided by the world¿s leading aviation photographers, Combat Aircraft also links coverage of modern subjects with outstanding historical stories from World War II and the Cold War years, including rare archive imagery. As well as being visually stunning, Combat Aircraft offers the reader a large amount of detailed information and thought-provoking opinion on topical military aviation issues. Combat Aircraft will give you unprecedented access into squadron crew rooms, and strap you into the cockpits of the world¿s greatest military aircraft! It provides up to date information from the leading manufacturers which you simply cannot get anywhere else and is your complete, one stop, portal for military aviation around the globe. In addition to the magazine, this new website will be deliver details of forthcoming features, video clips, author Blogs and other online features that will act as a perfect accompaniment to the printed magazine. Combat Aircraft - the world¿s best military aviation magazine.